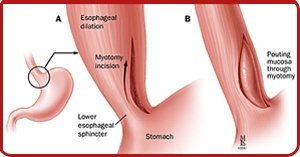 Dr. Ahmad has performed more than 1000 robotic surgeries, including robotic gastric bypass, robotic sleeve, robotic hernia procedure, robotic anti reflux procedure, robotic colon operations and robotic gallbladder surgery. He is recognized in Long Island as one of the most advanced robotic surgeons in the country. Dr. Ahmad founded and is the director of the Robotic and Bariatric Surgery Center of Excellence at Mather Northwell Hospital. This is the only intuitive certified epicenter in Long Island for robotic bariatric surgery as of June 2020.

Achalasia is a common condition that causes difficulty swallowing as a result of the lower esophageal sphincter muscles being unable to relax, making it hard for patients to pass food into the stomach. This cause of this condition is unknown, but is believed to involve infections, hereditary factors or abnormalities within the immune system that cause damage to the esophagus.

In addition to having difficulty swallowing, patients with achalasia often experience chest pain, regurgitation and chronic coughing. If left untreated, achalasia may lead to esophagitis, which is inflammation of the esophagus, unwanted weight loss and aspiration pneumonia.

Achalasia can be corrected through a surgical procedure called Heller myotomy, which cuts the sphincter muscles that join the esophagus and stomach. This limits the activity of the muscle and allows food to pass more easily into the stomach, relieving most patients of their symptoms. Since the sphincter muscles can longer close completely after this procedure, your surgeon may choose to also perform fundoplication to reduce the risk of the patient developing gastroesophageal reflux.